During the pandemic in 2020 the McKee family started a really fun activity playing concerts in their driveway. This musical family consists of Ron and Pat McKee, their two daughters, and four grandkids. Ron has played trumpet with the Oakville Symphony for over 30 years.

The idea for the driveway concerts started back in March 2020 when people in the community stood outside their homes at 7:30 p.m. (that is when shifts change at hospitals), banging pots and pans to express appreciation to hospital workers who were working endless hours and putting their lives on the line caring for COVID patients. Ron’s Oakville Symphony concerts had been cancelled and he felt little incentive to play his trumpet. However, with Pat’s encouragement and a bit of practice, he stepped onto the driveway at 7:30 p.m. on April 28 to play the Canadian national anthem as well as the theme from “Hockey Night in Canada”. The driveway concerts had begun! The next day Pat joined Ron on the driveway with an amplified guitar and a microphone and sang a couple of songs for another COVID driveway concert. For their third driveway concert on May 3, Ron performed with a karaoke accompaniment and Pat played and sang a couple of songs. At the suggestion of a cousin in Greece they performed a duet on guitar and trumpet, playing a stirring Canadian composition called “Valour in Kandahar”. 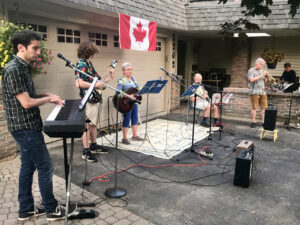 The driveway concerts proved to be popular and continued to evolve throughout the Spring and Summer. What began as Ron and Pat doing 10-minute mini-concerts grew to a group of five instrumentalists (including Oakville Symphony clarinetist and bagpiper Stephen Walter, and friend Eran Rosen on keyboard) and up to five singers. They would perform 45-minute concerts for friends and neighbours who safely spread themselves out to watch. The concerts included a bagpipe medley, vocal performances by their daughter Alice and her 2 children, and grandson Evan on guitar. “Valour in Kandahar” was now being performed with trumpet, bagpipes, and two guitars, and the group presented a wide variety of popular music.

Ron and Pat and their neighbours found these driveway concerts built an increased sense of community, and food bank donations were collected at each concert. They got to meet and become friends with more of their neighbours. While they were practising on their back deck for the July 1 Canada Day concert, they heard a lovely bass voice singing along to “Maple Leaf Forever”. Turns out it was their long-time neighbour Herb Benson, who also plays jazz drums. I bet you can guess who was playing drums at their eighth driveway concert later in July! This concert also included all four of the McKee grandkids performing together.

As the concerts grew in popularity and number of performers, Pat took on the role of general manager, co-ordinating the performers and ensuring that the concerts remained safely distanced for performers and the sidewalk audience. “Valour in Kandahar” became their signature song and they began renting sound equipment to add to the two guitar amps which they own. They even used the first initials of the six instrumentalists to come up with the name SPHERE for the group. Pat has also uploaded many of the performances from their 11 concerts from 2020 onto YouTube. Here are a few favourites:

Valour in Kandahar
Should I

With the warmer days of Spring just around the corner, Ron and Pat are now planning their 2021 driveway concerts.

With thanks to Ron and Pat McKee, and Jill Yokoyama