The Oakville Symphony and Oakville Centre for the Performing Arts are pleased to present Penny Johnson performing selections from J.S. Bach’s The Well-Tempered Clavier.

“Bach’s groundbreaking work is justly regarded as one of the most important compositions in the history of Western music. A source of inspiration to Haydn, Mozart and Beethoven, The Well-Tempered Clavier’s vast musical range, from poignant preludes to lively French dances, is a delight for performer and audience alike.” ~ Roberto De Clara, Oakville Symphony Music Director 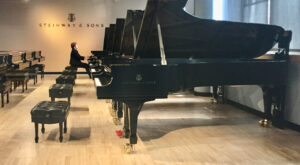 Oakville, and the Oakville Symphony, has Penny Johnson to thank for her expert help in selecting the Oakville Centre’s gorgeous Steinway concert grand in May 2017. The Symphony’s co-chairs at the time, Anna Hewitt and Rob Whittaker, were privileged to witness the formal selection process at the Steinway Gallery in New York City, following a fascinating tour of the Steinway factory in Queen’s, NY. With five glossy black pianos to choose from, Penny slid from one bench to another, playing the same piece of the Goldberg Variations and a little Radiohead, eventually falling in love with the sensitive touch and mellow tones of Number 606624.

You can watch a short video about the selection and arrival of the piano by clicking here.

Canadian pianist, Penny Johnson holds a Doctor of Musical Arts degree in Piano Performance from the Manhattan School of Music. As the recipient of the Helen Cohn Award, given to an outstanding doctoral student, Penny also holds a Master of Music and Bachelor of Music degree with High Distinction from the Eastman School of Music .

Best known for her performances of the music of J. S. Bach, Penny is a frequent soloist at concert series around the GTA. A semi-finalist at the 8th International J. S. Bach Piano Competition in Würzburg, Germany, Penny has participated in residencies at The Banff Centre and is the recipient of grants from the Canada Council for the Arts. She has published online, an edition of the composer’s Two-Part Inventions arranged for inverted voices, as well as the ending that she composed for the unfinished final movement of Art of Fugue. In 2016, Penny released a recording of the complete Inventions and Sinfonias.

As the creator of The Great Pianists: Stories, Music & More, Piano Listening For Kids and the adult spin-off, New Adventures in Piano Listening, Penny is passionate about bringing unique and insightful experiences to lovers of piano music. Her audiobook podcast, From Stage to Page, is devoted to the forgotten stories and memoirs of female performing artists from the late nineteenth and early twentieth centuries. Penny is also the creator of Glenn Gould 905: A Triple Birthday Multi-Media Celebration for The Chamber Music Society of Mississauga.

Recent Posts
Archives
Support our thriving community orchestra which enriches our community’s culture by bringing the inspirational experience of music to its musicians and audiences of all ages.
Donate Now!
Copyright 2021 Oakville Symphony - All Rights Reserved. Design by BFdesign Inc.
Back To Top