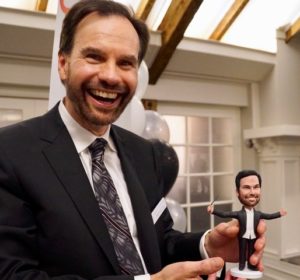 Flat (as in “Two-Dimensional”) Roberto was carefully modelled on Mini Roberto, seen in the photo to the left. As many of our patrons know, in honour of his 20th season Oakville Symphony’s Maestro Roberto De Clara was presented with his very own bobblehead. Rumour has it that Mini Roberto stands on the maestro’s piano at home and supervises the study of scores of Serious Symphonic Works. 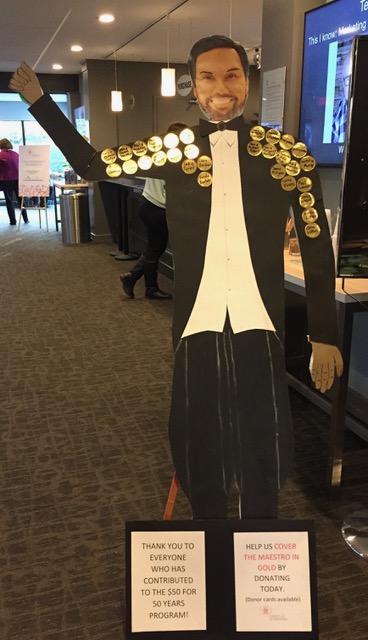 Here’s Flat Roberto in the lobby of the Oakville Centre at the season finale of our 49th season. Cheerfully waving his baton, he’s decked out with gold stickers, each one representing a $50 donation towards our upcoming 50th season.

Little did he know that an accident was about to befall him..

On his way to a board meeting, where he was going to be photographed with the OS’s directors, he was asked to help a lady cross the road. (No alternative facts. This happened.) Halfway across, he bent his head so far back, it snapped off. Luckily, Real Roberto came to the rescue. 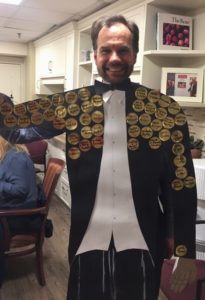 Here is… Hybrid Roberto. Notice that his sticker collection has grown. That could be why he’s smiling, even though he knows he’s going to need surgery.

We are happy to report that the operation was successful. Flat Roberto will be making further appearances as he turns to gold.

Did we mention that we are grateful to our donors for helping to fund our 50th season special events? (Don’t tell Flat Roberto, but we plan to commemorate the names of our supporters on a permanent plaque when the campaign is over.) Join the fun by sending your donation to: