Canada’s national anthem has a long and surprising history. It was first performed in 1880, having been commissioned by the Saint-Jean-Baptiste Society to promote Quebec nationalism. There have long been allegations of plagiarism by Lavallée from Mozart’s Magic Flute, whose March of the Priests bears a strong resemblance.

The French words were given a rather poor translation, so that the English version, first heard in 1907, was not readily accepted. Since then, there have been numerous changes to the words, including most recently (1968) “From far and wide” and “God keep our land”.

The Maple Leaf flag was adopted in 1965, but there was resistance to the idea of replacing God Save the Queen; it was not until 1980, after the Quebec referendum, that O Canada finally became our official national anthem. Debates about the words (such as “our home and native land”) continue, and there have so far been 11 failed bills to replace “all our sons” by “us”.

Ridout was born in Toronto, and served on the faculty of the Toronto Conservatory and the University of Toronto from 1938 to 1982. He wrote in many musical forms, including drama and films scores for the CBC and the National Film Board. Fall Fair was commissioned for the CBC Orchestra and premiered at the United Nations General Assembly in 1961. Ridout jokingly described the two main themes as a “vulgar” tune and a “big” tune. The former is presented initially by the brass in a fast and syncopated version, and later becomes slower and more lyrical. The “big” tune is first an English horn solo; it has a counter-melody in a number of repetitions, which also involve a prominent French horn solo.

The tone poem Totenfeier (Funeral Rites), completed in 1888, subsequently became the opening movement of the epic “Resurrection” symphony. It was written at a time when Mahler was suffering hallucinations of his own funeral. In Mahler’s words, the movement asks the “great questions: Why have you lived? Why have you suffered? Has it all been only a huge, frightful joke?”

As its subtitle suggests, the symphony is an allegory of man’s existence. Paradoxically, it opens (in this first movement) with a consideration of death, as a beginning, not an ending. In contrast, the four later movements draw us towards the concept of renewed life. The threatening opening of Totenfeier in the basses questions the “why” of human existence, with further questioning in the winds and then the full orchestra. There are periods of relative calm (for instance a quiet melody in the horns and strings), but the struggle continues. The rhythm of a funeral march is heard from the basses, and there are moments of enlightenment, but the turmoil gradually fades away towards exhaustion at the end.

Coblentz says about this work that the word “overture” comes from the French ouverture, which denoted a piece that formed an introduction to a ballet, opera or oratorio in the 17th century. From Beethoven until the 20th century, the overture typically assumed an independent role as a stand-alone work for orchestra. The Romantic Overture was commissioned for the OSO season finale in 2014. Coblentz has remarked that he has fond memories of attending many OSO concerts as a young musician growing up in Oakville, and that many of his friends, colleagues and teachers have performed with, and continue to perform with us.

This piece embodies a mid-19th century compromise between the classical and romantic styles, and is probably Bruch’s best-known work. After the first performance in 1866, it was revised with the advice of celebrated soloist Joseph Joachim, and attained its final form two years later.

Breaking with tradition, the first movement is very short, and begins with a prelude that is unrelated to the other parts of the movement. In fact, because of the brevity of this movement, Bruch was unsure whether he should call the work a concerto or a “fantasy”; Joachim’s opinion was that the extensive and symmetric development of the other two movements qualified it as a concerto. Overall, the piece is highly melodic and displays many opportunities for virtuosity. The familiar third movement finale has a gypsy quality, especially in the theme suggested by the orchestra, but brought out fully by the soloist. 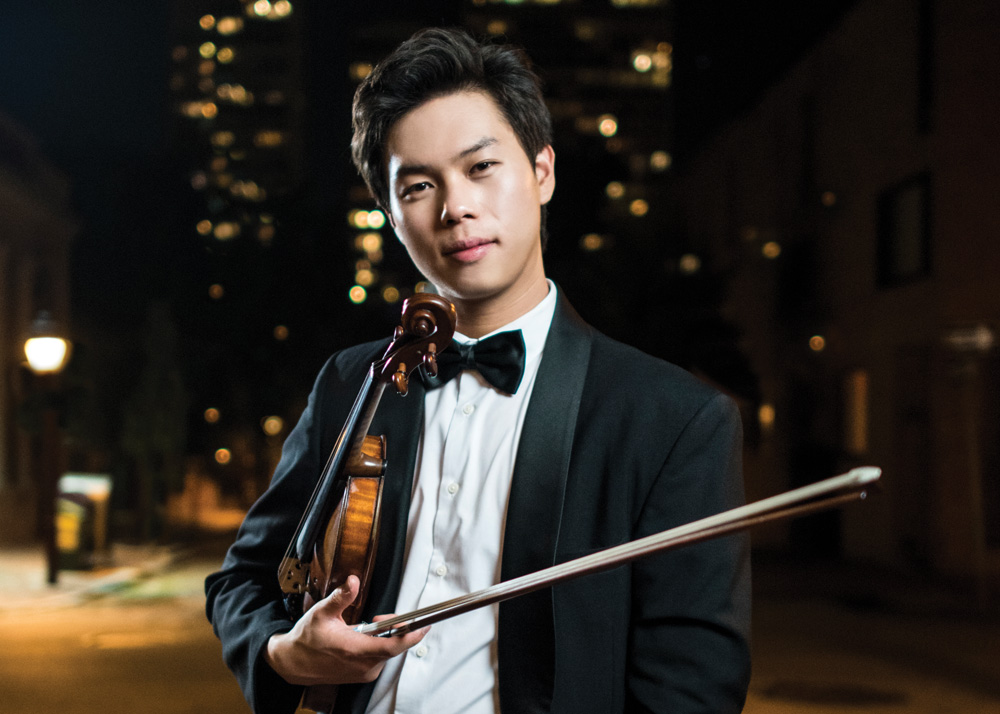