This relatively unusual musical form is, as its name implies, a mixture of symphonic and concerto elements, but perhaps this work leans more towards the latter. It was composed in 1779, during Mozart’s final months while still working for the Archbishop of Salzburg. This was a difficult time for Mozart: he had a challenging relationship with his employer, he had not found a suitable position elsewhere, and his mother had died while they were recently on tour in Paris. The precise origins of this work are unclear, because the score was not published until 10 years after Mozart’s death, but it is possible that he himself intended to be the solo violist.

There is a completely equitable division of responsibilities between the two soloists, who play either together or follow one another on a question and answer basis. Mozart specified that the viola should be tuned a semitone higher than normal, possibly to provide a brighter sound and better balance between the two solo instruments, but most violists prefer to retain the conventional tuning and transpose.

There are some interesting features of the orchestral scoring. First, perhaps to provide more contrast with the solo lines, the orchestral violas are subdivided into two sections. Second, the double basses have their own part independently of cellos, which departs from the norm of the time when the basses and cellos were almost always in unison. In general, the orchestral score is quite rich in nature.

The opening of the first movement is highly symphonic, with the orchestra presenting considerable thematic material. However, the soloists, who enter with unison octaves, ignore all this and introduce a variety of completely new ideas. Later, each soloist has a recitative, and there is a cadenza for both players.

The Andante involves a rather sad dialogue between the soloists, with each trying to out-do the other as the movement progresses. Again we have a cadenza for both instruments.

In the final movement, the Rondo is heard first in the orchestra, and then it is elaborated by the soloists. There are rapid-fire interchanges between them as the material is developed. An interlude between the horns and oboes recalls a similar episode in the first movement.

This, Tchaikovsky’s last work, was first performed on October 28, 1893, just nine days before the composer’s death on November 6. Tchaikovsky had written several drafts of a 6th Symphony on his return from a trip to America in 1891, but he tore them up because of depression and a self-assessed inability to compose creatively. In the end, the actual score of the Symphony was written very rapidly during 1893. Of course, the subtitle Pathétique is intended to convey “pathos” or “passion”, rather than meaning “pathetic”, and it perhaps refers to Tchaikovsky’s continuing depression.

A sense of sadness is evident from the very outset with a brooding bassoon solo, leading to a period of struggle between loud and soft passages. The second movement is in the rare 5/4 time signature, which has been described as a “three-legged” waltz; it replaces the slow movement which would conventionally be heard at this stage of a symphony. The third movement is a scherzo in the form of a march—and a relatively light-hearted one in the overall context of this work.

The final movement is, most unconventionally, an Adagio. It is a cry of grief, displaying Tchaikovsky’s mood of profound pessimism and despair at the time. Indeed, some have interpreted it as Tchaikovsky’s musical last will and testament. Tchaikovsky himself conducted the Symphony’s first performance in St. Petersburg, but he died a few days later after having drunk unboiled water—an act considered by many as suicidal, given the cholera epidemic occurring at the time.

Because of the unusually quiet ending to the symphony, some conductors have been known to exchange the playing order of its third and fourth movements, to provide a more spectacular finale. However, the Oakville Symphony will remain true to Tchaikovsky’s intentions. 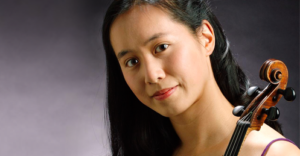 Sharon Wei is a dynamic and varied musician, establishing herself as one of the most respected violists on the scene today. She has appeared as soloist, chamber musician, and guest principal violist throughout North America and Europe. She has collaborated with conductors such as James Levine, Kent Nagano, Paavo Järvi, Zubin Mehta, Jean Christophe Spinosi and Yuri Termirkanov; Sharon has also shared the stage with Lynn Harrell, Gary Hoffman, Lawrence Lesser, Peter Frankl, Joseph Silverstein, Jonathan Crow, Mark Fewer, Joel Quarrington, James Campbell, James Sommerville and the St. Lawrence String Quartet. Sharon has performed at festivals such as Verbier, Prussia Cove, Banff, Ravinia, Chamberfest in Ottawa, Agassiz in Winnipeg, Summer Solstice in Edmonton and Tuckamore Festival in Newfoundland.

In 2006, Sharon and pianist Angela Park co-founded Ensemble Made in Canada, which includes violinist Elissa Lee and cellist Rachel Mercer. Ensemble Made in Canada performs in various configurations: sonatas, duos, and quartet repertoire. The group has commissioned and premiered works by American composer John B. Hedges and Canadian composers John Burge and Christopher Mayo. Upcoming commissions include works by Canadian composers David Myska and Omar Daniel. EMIC began as Ensemble-in-Residence at Western University in 2014. The ensemble has toured across Canada and given masterclasses and workshops at many universities and conservatories. Sharon is also the violist in the Supernova String Quartet that is in residence at Scotiafestival in Halifax.
Sharon has given masterclasses throughout China, the US, and Canada. She was on the faculty at Yale University and Stanford University and began her appointment as Assistant Professor of Viola at Western University in 2014. At Western, she has designed a course for performance majors in which students learn important off-stage initiatives such as networking, grant writing, website design, and managing finances.

Rare time away from the viola is spent on Bikram yoga (done in 12 cities and counting), hiking, playing Settlers of Catan, and seeking out macaron shops.

Scott St. John lives in London, Canada with his wife Sharon Wei and daughter Julia. Scott was a member of the St. Lawrence String Quartet and faculty member at Stanford University for seven years, from 2006 – 2013. Currently he coaches chamber music at Western University (Canada), plays chamber music at the Marlboro Music Festival (Vermont), and plays concertmaster of the ROCO Chamber Orchestra in Houston. Scott is a partner in the new Rebelheart Collective at Aeolian Hall, an innovative chamber orchestra and youth mentorship program connected with El Sistema.

A recent recording of Mozart’s Symphonia Concertante with his sister Lara St. John won a Juno Award for best recording: solo with orchestra. Working with composers has been important throughout his career; Scott has worked with John Adams and Oswaldo Golijov in the US, and Arsenio Giron, Gary Kulesha, Elizabeth Raum and many others in Canada.

Scott began his violin studies at age three with Richard Lawrence, in London. He is a graduate of the Curtis Institute of Music where he studied violin with David Cerone, Arnold Steinhardt, and chamber music with Felix Galimir. Current non-musical activities include serving on the boards of the London Organic Food Co-op and Transport Action Ontario. Scott also supports HanVoice, a lobby organization for North Korean refugees in Canada.

Support our thriving community orchestra which enriches our community’s culture by bringing the inspirational experience of music to its musicians and audiences of all ages.
Donate Now!
Copyright 2021 Oakville Symphony - All Rights Reserved. Developed by Trajectory Brands Inc.
Back To Top