Onegin was completed in 1878, and is based on Pushkin’s tale of the disastrous events when the love of Tatiana is rejected by Onegin. This parallels Tchaikovsky’s personal life at the time, when a music student in Moscow, Antonina Miyokova, had written to Tchaikovsky declaring her love for him, and threatening suicide if he would not see her. Although Tchaikovsky did not know Antonina, he agreed to see her, and shortly afterwards (in 1877), more out of pity than for love, married her. The marriage was doomed to failure: Tchaikovsky himself attempted suicide and Antonina eventually died in a mental asylum. Despite these tragic overtones, Tchaikovsky’s fondness for ballet and other dance music composed at the time shines through, as in the Polonaise.

Gade was the leading Danish composer of his day. He worked as assistant conductor in Leipzig under Mendelssohn, and later taught Grieg and Nielsen. The concert overture Ossian was Gade’s first composition (1840), and it was strongly influenced by Mendelssohn’s Fingal’s Cave overture (1832), in two ways. First, with a similar structure to Fingal’s Cave, the Ossian overture involves a slow and stately introduction, folk song melodies, and furious battle scenes. Second, although the historical origins are not completely clear, Ossian is the narrator and author of a series of epic poems, published in 1760. Ossian was the son of Finn (or Fionn mac Cumhaill, anglicised to Finn McCool). Finn was later renamed Fingal, thus completing the circle back to Mendelssohn.

Coulthard was born in Vancouver. After a short time at university in B.C., she studied in the late 1920s at the Royal College of Music in London with Ralph Vaughan Williams. Later in her career, she worked with several other notable composers, including Copland, Milhaud, Schoenberg, and Bartók.

After studying composition at the Julliard School in 1944-45, she joined the Department of Music at UBC, where she was on staff until her official retirement in 1973. Like many retirees, she continued working for many more years, with her last composition coming just months before her death at age 92. She left more than 350 pieces, in many styles, ranging from highly accessible to highly abstract, including opera, symphonies, concerti, solo and chamber works. She is recognized as a groundbreaking female and Canadian composer.

The Canadian Fantasy, one of her earliest compositions (1940), helped to establish her reputation in Canada. It is largely based on three Canadian folk songs: Mon Doux Berger, the Huron Carol, and La Belle Françoise.

While he was strongly influenced by Liszt and Schumann, Grieg is more often compared to Chopin, being sometimes referred to as the “Chopin of the North.” Norway was striving for independence from Swedish rule, and Grieg’s music was readily adopted as a nationalistic style. Ironically, the piano concerto, one of Grieg’s most famous works, was actually written in Denmark, on a summer holiday with his young wife. Having left their new baby with grandparents in Copenhagen, Grieg enjoyed the quiet Danish countryside, particularly as he disliked being heard playing the piano while composing.

The concerto was first performed in 1869, but its score was revised the following year when Grieg sought advice from Liszt. Further revisions continued almost until Grieg’s death, to produce the version usually heard today. Like Chopin, Grieg was not strong in orchestration, preferring smaller-scale works. The concerto, therefore, involves relatively simple melodies, with limited integration of the solo and orchestral parts. However, considering the famous opening solo fanfare, and through to the Norwegian halling folk dance of the last movement (begun without a break after the second movement adagio), it is Grieg’s melodies that carry the day, and create one of the world’s most popular piano pieces. 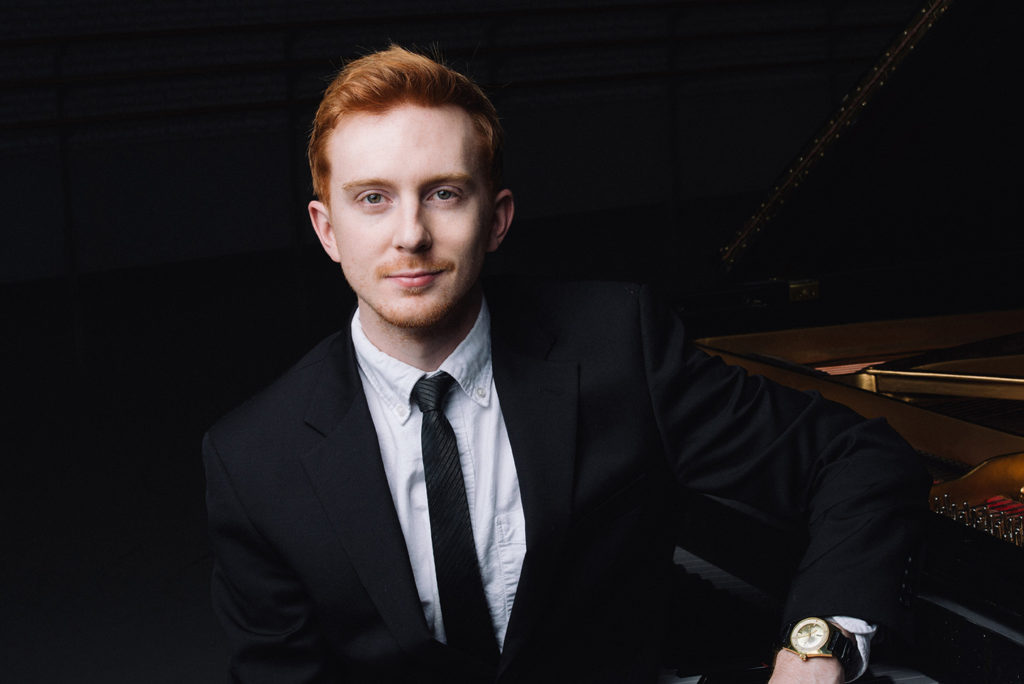 Christopher’s awards include 1st prize and audience prize in the 2015 Seattle International PianoCompetition, 2nd Prize in the 2015 Iowa International Piano Competition, and top prizes in the Los Angeles Liszt Competition, The Glenn Gould Chamber Music Competition, and the Susan Torres Competition for pianists. Festival appearances include performances at the Banff Centre, Aspen Music Festival, Sarasota Music Festival, Kneisel Hall Chamber Music Festival, The Holland Music Sessions, and Music Academy of the West. Through his travels and studies, he has had the opportunity to work with a number of influential pianists, namely Leon Fleisher, Jeremy Denk, Seymour Lipkin, Joseph Kalichstein, Robert Levin, Claude Frank, and Anton Kuerti and as an active chamber musician, he has collaborated with the likes of the Schubert Ensemble of London and members of the Takacs, Ysaye, St. Lawrence, Amenda, Guarneri, and Tokyo String Quartets.

Born in Los Angeles, California, Christopher began his formal training at the Pasadena Conservatory of Music at the age of 5. He studied with John Perry at the University of Southern California and the Glenn Gould School in Toronto and subsequently received his Master’s Degree from The Juilliard School in New York City as a student of Hung-Kuan Chen and Jerome Lowenthal. Currently, Christopher is pursuing post-graduate studies at the Yale School of Music under Peter Frankl.