Ontario-born John Estacio has served as Composer in Residence for the Calgary Philharmonic, the Calgary Opera, and the Edmonton Symphony Orchestra, and his work is frequently broadcast on radio and television. Estacio received two JUNO nominations for his CD Frenergy.

The title Frenergy is a portmanteau of “frenetic” and “energy”. Indeed, the tempo is energetically brisk and the pacing of melodic ideas is often more than a bit frantic. A percussion introduction establishes an urgent 6/8 pulse. After an orchestral tutti, the winds provide a chromatic melody that is quickly tossed back and forth between instruments, often complementing an ostentatious tune in the brass. The third melody, introduced by a solo flute, is perhaps the most substantial tune of the piece. A restless string passage returns us to the opening material and the piece concludes with a dynamic tutti along with the pounding drums of the opening.

Coulthard was born in Vancouver. She attended the Royal College of Music, London with Ralph Vaughan Williams, and later worked with other notable composers, including Copland, Milhaud, Schoenberg, and Bartók. After studying composition at the Julliard School in 1944-45, she joined the faculty at UBC, where she was on staff until her retirement in 1973. Like many retirees, she continued working for many more years, with her last composition coming just months before her death at age 92. She left more than 350 pieces, in many styles, ranging from highly accessible to highly abstract, including opera, symphonies, concerti, solo and chamber works. She is recognised as a groundbreaking female and Canadian composer.

Canada Mosaic was written in 1974 for a tour of the Far East by the Vancouver Symphony Orchestra, and it contains seven short movements reflecting Canadian folk songs. The Introduction is based on Coulthard’s original Lullaby for a Snowy Night, while The Contented House cites the Quebecois folk song À la claire fontaine (By the Clear Fountain).

The Argentinian Piazzolla was largely responsible for developing the New Tango style, merging classical ideas with jazz.  He himself was a virtuoso on the bandoneon (the South American accordion), and often performed his own compositions.

Libertango (1973) was written while Piazzolla was living in Italy.  Its title combines Libertad (liberty) and Tango, and illustrates a break-away from the more traditional tango idiom. Oblivion (1984) is one of Piazzolla’s most popular pieces, in the more traditional tango style, and it was used as the soundtrack for a film Henry IV, the Mad King.

Even though Abreu is not a household name, his Tico-Tico (1917) is a widely-known Brazilian song, with a very catchy rhythm.  When Tico-Tico was first performed at a ball, Abreu remarked that the dancing couples looked like sparrows hopping and jumping around, and so a title was added – meaning “sparrow in the cornmeal.” It has been popular since the 1940s, being used in a number of movies, including Copacabana with Groucho Marx.

The young Moncayo earned his living playing jazz in Mexico City, but he later became conductor of the Orquesta Sinfonica de Mexico. He loved showcasing Mexican music, mostly based on native folklore, and Huapango was one of his earliest compositions of this genre. Sixty years on, it remains popular in Mexico, almost as an unofficial national anthem.

The Huapango is a Mexican song form incorporating voice, dance, and instrumental accompaniment, originating in Veracruz. Its name has been variously explained as a corruption of the word “fandango,” a contraction of “Huaxtecas” (a local tribe) and “Pango” (a local river), or derived from words meaning “the site where the wood is placed,” namely, wooden planks for dancing. All these explanations are equally plausible – so take your pick!

In Moncayo’s brilliant orchestration, there is prominent scoring for percussion, and numerous solos, notably for trumpet, trombone, and harp. Latin rhythms are intertwined, with frequent syncopation. The result has been described as being hit by “a triple tequila”!

This famous piece was originally composed in the space of a month in 1924, in response to an invitation by Paul Whiteman to write something for jazz band at an upcoming concert. Gershwin himself was the soloist at the premiere, which was attended by Toscanini, Rachmaninov and Stravinsky. It became a sensational success and launched Gershwin’s career.  After Gershwin’s death, Ferde Grofé, who had helped with the original band arrangement, created the orchestral version most commonly heard today.

The style is a mix of romanticism, Dixie jazz, and Stravinsky-like elements, and an interesting feature is the frequent use of “blue notes” (flattened thirds and sevenths), characteristic of African-American music. The opening has a spectacular solo for the clarinet, after which the major themes are presented and developed at some length.  A moderato section follows, with its well-known melody.  The final section develops a slow dialogue between piano and orchestra, leading to the finale. Throughout, there is ample opportunity for virtuosity on the part of the soloist, and numerous solos for the orchestral principal players. 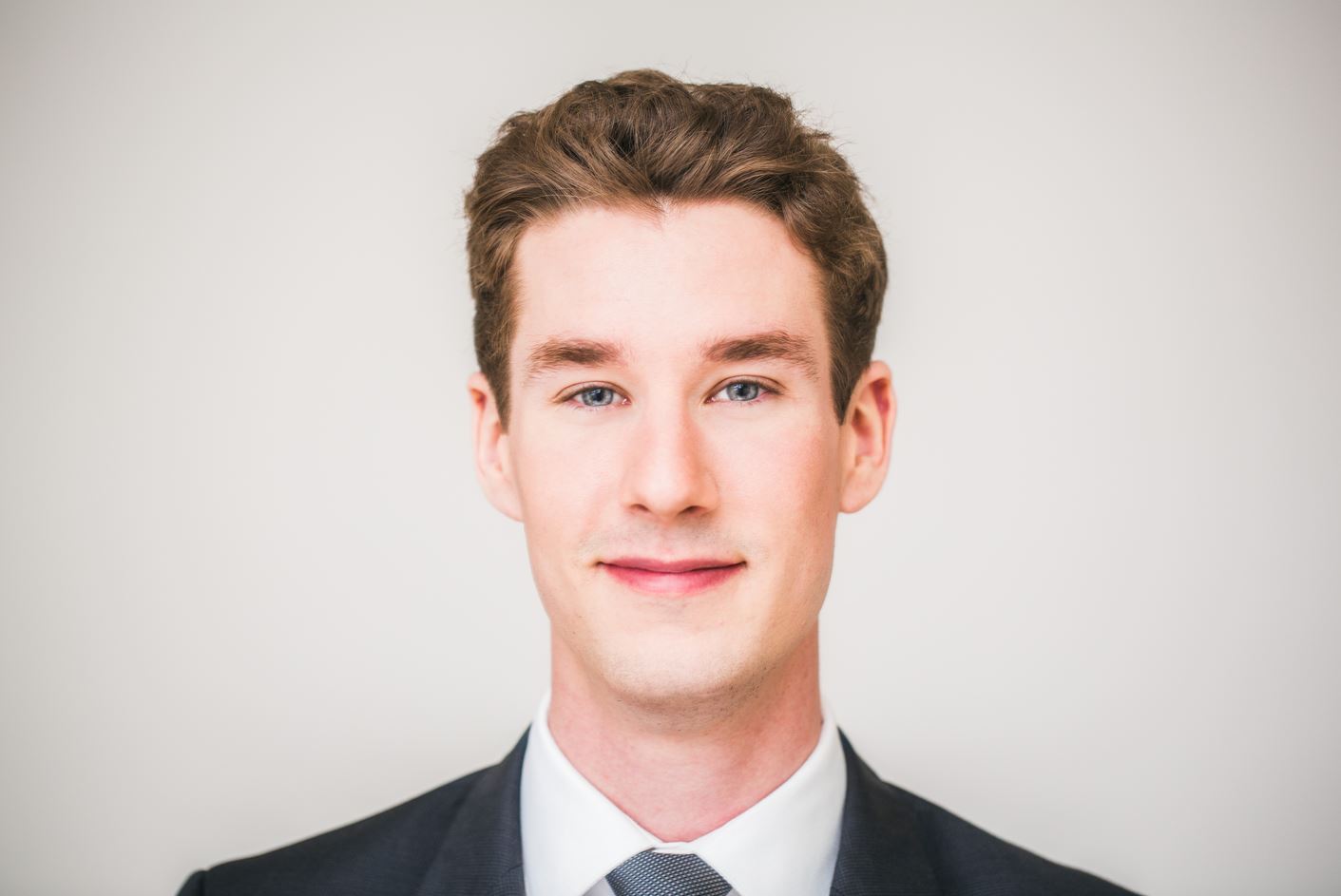 Lucas Porter has been heralded as “a young lion of the keyboard” with “staggering virtuosity and some of the old-school pyrotechnics and unabashed romanticism of early 20th-century legends like Moiseiwitsch or even Sofronitsky” (Natasha Gauthier, Ottawa Citizen). This past February, Lucas gave an “All Schubert” recital at Oberlin College, alongside several vocalists and string players.In the spring of 2016, Lucas performed Ravel’s G Major Concerto with the Kamloops Symphony Orchestra. He will also be performing Gershwin’s Rhapsody in Blue with the Oakville Symphony in May of 2017. In the winter of 2014, he completed a tour of 21 concerts under management of Jeunesses Musicales of Eastern Canada. In the fall of 2013, he performed Frédéric Chopin’s Concerto No.2 with Symphony Nova Scotia at the Rebecca Cohn Theatre in Halifax, Nova Scotia. Lucas also performed Sergei Prokofiev’s Concerto No.3 with the “Mihail Jora” of Bacau Orchestra in Cantu, Italy in the summer of 2013. Lucas was accepted into the International Mendelssohn Akademie that took place in Leipzig in July of 2014, studying with world renowned pedagogues Jacques Rouvier and Arie Vardi.

A graduate of the Glenn Gould School’s Bachelors of Music Program, he is the youngest student to date to ever win the school’s Concerto Competition. His competition highlights include his success at the Montreal International Musical Competition where he was an audience and media favorite. Montreal Gazette critic Robert Markow described his double octaves as being “the fastest since Horowitz, and even cleaner.”

Chosen to represent Canada at Expo 2005 in Nagoya, Japan, he took part in a series of concerts along with Canadian soprano, Measha Brueggergosman. At the invitation of the Honourable Peter McKay, he played for Condoleezza Rice at the Halifax 9/11 Ceremony in September of 2006. He also performed in the 2011 Canada Winter Games which were held in Halifax, Nova Scotia. In 2013, Lucas won one of the 2011 Canada Games Young Artist of Excellence Awards from Nova Scotia Talent Trust. NSTT has been very supportive of Lucas and his musical career for many years.

Also a composer, Lucas has written for piano, orchestra, and film. Lucas won the Notions Realize Music Challenge, an international composing competition sponsored by Virtuoso Works. Inc. receiving first place in the 18 and under category for best Orchestral Composition. The premiere performance of his Port Williams Overture was performed by the Nova Scotia Youth Orchestra. He also wrote the score for Canadian director Navin Ramaswaran’s short film “A Fork in the Road” which premiered at “MIFF” (Mississauga Independent Film Festival) in September of 2011.