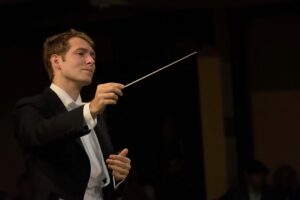 The Oakville Symphony is thrilled to announce that Lorenzo Guggenheim has been selected as its new Music Director and Conductor.

He will begin his leadership of the orchestra in the 2022-23 season.

Mr. Guggenheim guest conducted the OS in April 2022 at the Oakville Centre for the Performing Arts.

“From the minute Lorenzo stepped onto the stage, he conveyed confidence, warmth and passion for what he does, and a genuine desire to share that passion with the audience.”

On his appointment, Lorenzo shared the following:

“I am very excited to be joining the fantastic Oakville Symphony family. During our time together earlier this year I witnessed the wonderful energy of the members of the orchestra and their dedication to making music at the highest level for a fabulously warm audience.

It is my immense honour to lead the OS in its new chapter and to help create a space in which the community of Oakville can gather to enjoy the unique sensation of communal listening, breathing, and feeling. I am looking forward to our thrilling 2022/23 season and to the many inspiring initiatives that we will present!”

The Oakville Symphony’s search for a new music director began in early 2020 after Maestro Roberto De Clara informed the Board that he would not be renewing his contract after conducting the OS for 24 successful years. A search committee was struck, consisting of a balance of professional and community musicians, current and former board members, and the executive director.

The OS received over 50 applications from Canada, the US and abroad, and invited twenty candidates to a first interview. Subsequently, a number of candidates were asked to submit a video presentation, a detailed multi-year concert season plan, and were interviewed by a second panel of search committee members. Due to the Covid pandemic, all meetings and interviews took place online.

Four highly-qualified applicants then guest-conducted a concert weekend in person during the 2021-22 season, which was extended to accommodate all of the conductors after the February concert was postponed due to public health restrictions. Musicians and audience members provided valuable feedback about the candidates via surveys after each concert. The search committee made its recommendation to the board of directors in July.

The OS invites patrons and supporters to meet Lorenzo Guggenheim at a ticketed social event at the Oakville Club on Sunday September 11, 2022 from 5-7pm.