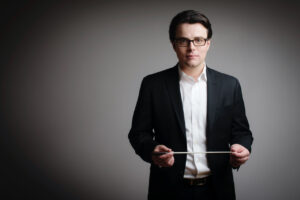 Martin MacDonald is one of Canada’s most dynamic and outstanding young conductors and has been awarded both the Heinz Unger Award and the Jean-Marie Beaudet Award for orchestral conducting.

Martin has guest conducted extensively across Canada having worked with the orchestras of Toronto, National Arts Centre, Vancouver, Victoria, Kamloops, Edmonton, Calgary, Winnipeg, Hamilton, Kingston, Kitchener-Waterloo, London, Niagara, Sudbury, Thunder Bay, Windsor, Quebec, New Brunswick, and Newfoundland. He has served as a Cover and Guest Conductor for the National Ballet of Canada for several productions, and has worked with the Minnesota Ballet, Atlantic Ballet, and Halifax Dance. Martin has recorded extensively for the CBC and for several commercial recordings.

Most notably, Martin has served as Resident Conductor, Associate Conductor, and a regular guest conductor of Symphony Nova Scotia since 2008 with over 200 performances in a diverse range of programs and artists. Previously, Martin served as Associate Conductor of the National Academy Orchestra of Canada, and has participated in several international conducting workshops and competitions.

Martin has a Master’s in Orchestral Conducting from McGill, a Bachelor’s in Cello from Memorial, and has studied conducting with Alexis Hauser, Bernhard Gueller, Boris Brott, Michael Jinbo, Kenneth Kiesler, Gustav Meier, Jorma Panula, and Johannes Schlaefli. Martin’s conducting activities have been generously supported by the Canada Council for the Arts.

Cape Breton born, Martin is the youngest of twelve children and has a diverse musical background with a strong Celtic music tradition including extensive touring and performing with members of his family throughout Europe and North America.

Martin resides in Toronto, Ontario with his wife, Kristen and their daughter, Frances.