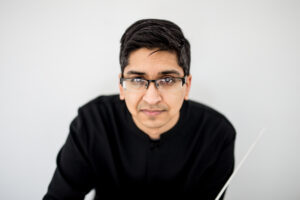 Pratik Gandhi is a conductor, percussionist, clinician, and researcher based in Toronto. He currently serves as music director of the Rouge River Winds and resident conductor of the Toy Piano Composers Ensemble.

In addition to the Oakville Symphony, Pratik is also a finalist for music director positions with the Cathedral Bluffs Symphony Orchestra and the Northdale Concert Band. Previously, he has served as assistant conductor of Symphony on the Bay (now the Burlington Symphony Orchestra) for five years, and as associate conductor with the Toronto Youth Wind Orchestra for three years.

Pratik is also a doctoral student at York University in Toronto, researching issues of equity and representation among wind band composers in Canada.

In frequent demand as a guest conductor and adjudicator across southwestern Ontario, Pratik serves as adjudicator and Vice-Chair for the concert band division of MusicFest Canada, as well as syllabus coordinator for the OBA Provincial Band Festival. He also adjudicated concert bands at the 2017 Alberta International Band Festival in Calgary. Pratik regularly presents workshops on conducting techniques, wind repertoire, and percussion pedagogy.

Pratik was the founding music director of Soup Can Theatre, and his work during his ten-year tenure with the company received rave reviews. Their 2013 production of Barber’s A Hand of Bridge, for which Pratik served as both stage director and musical director, made “a powerful impression”, and delivered “an abundance of emotion and meaning”; it was also nominated for Best Indie Production of 2013. Most recently, Pratik arranged and directed the music for Soup Can’s widely-acclaimed adaptation of Dickens’ A Christmas Carol, set in Toronto’s historic Campbell House; according to one review, the music successfully served as “a barometer of the health of the scenes” of the show.

Pratik is also a champion of new music, and has conducted the premiere of numerous works for orchestra, wind band, and chamber ensembles. Under his leadership, the Rouge River Winds have helped to commission new works from Steven Bryant, Giovanni Santos, and Bill Thomas. With the Toy Piano Composers, Pratik has directed the premieres of works by Elisha Denburg, Alex Eddington, August Murphy-King, and Monica Pearce, among many others. Pratik is credited as conductor on three albums of contemporary music: Bekah Simms’ impurity chains (conducting two tracks, including the Juno-nominated “Granitic”); the Toy Piano Composers’ self-titled debut album; and the recent premiere recording of Benjamin Sajo’s “The Great War Sextet”.

Pratik received a B.Mus. in music education and an M.Mus. in conducting from the University of Western Ontario, where he studied conducting with Dr. Colleen Richardson, Jerome Summers and James McKay, and percussion with Dr. Jill Ball.